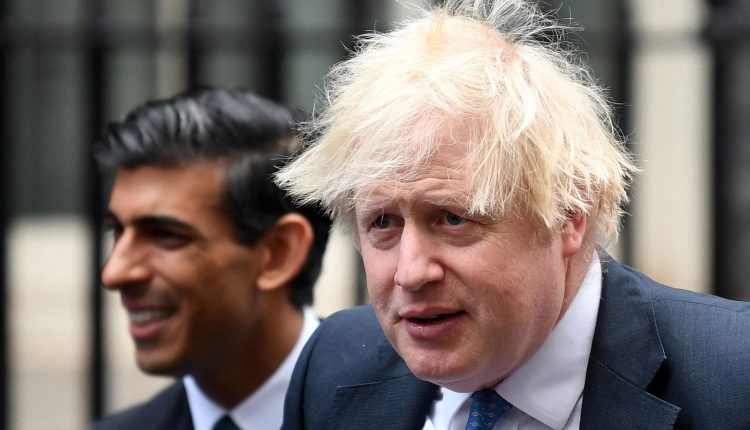 Boris Johnson and Rishi Sunak have rejected calls to resign, despite being fined by police for breaking lockdown rules in Downing Street in June 2020.

The prime minister, the chancellor and the PM’s wife all received fixed penalty notices for attending a birthday gathering for the PM in No 10.

As a result, Mr Johnson became the UK’s first serving prime minister to be sanctioned for breaking the law.

All three apologised, but opposition MPs say the PM and Mr Sunak must quit.

Mr Johnson said he felt “an even greater sense of obligation to deliver”, while the chancellor said he was “focused on delivering for the British people”.

But a group representing bereaved families said there was “simply no way” either could continue in their jobs, calling their actions “truly shameless”.

Amanda McEgan, whose daughter Isabel died during the pandemic, said the prime minister’s conduct during the lockdowns made restrictions on the 19-year-old’s funeral “more hurtful”.

Opposition parties accused Mr Johnson and Mr Sunak of lying to the public about their attendance at the Downing Street gathering, with Labour leader Sir Keir Starmer and the first ministers of Scotland and Wales demanding they step down.

The SNP and the Liberal Democrats also led calls for Parliament to return from its Easter break so the PM and chancellor could face questions from MPs.

Nearly all cabinet ministers have publicly backed Mr Johnson and Mr Sunak – including Foreign Secretary Liz Truss, who said they were “delivering for Britain on many fronts”.

Nigel Mills is currently the only Tory MP known to have said publicly that Mr Johnson should go, telling BBC Radio Derby: “I don’t think his position is tenable”.

Others who called for him to resign earlier in the year, including Scottish Tory leader Douglas Ross, have now said they don’t think he should.

Transport Secretary Grant Shapps said Mr Johnson was “mortified” about being fined, but argued he had not “set out with malice to break the law”.

He told BBC Breakfast he understood public anger over the parties, but added: “Everyone is human. People make mistakes”.

The fines come as part of an investigation by the Metropolitan Police into illegal parties held in Downing Street and across Whitehall during Covid lockdowns in 2020 and 2021.

The force is looking into 12 parties overall, and has already issued more than 50 fines, with more expected to come.

Speaking on Tuesday, the PM said he accepted “in all sincerity that people had the right to expect better” from him.

He claimed the event he was fined for attending – a gathering in the Cabinet Room to mark his birthday – was “brief” and lasted “less than 10 minutes”.

He added: “In all frankness, at that time it did not occur to me that this might have been a breach of the rules.

“But, of course, the police have found otherwise and I fully respect the outcome of their investigation.”

A spokesperson for the prime minister’s wife, Carrie Johnson, said she had accepted the police’s findings and “apologises unreservedly.”

Mr Sunak later released a statement, saying: “I understand that for figures in public office, the rules must be applied stringently in order to maintain public confidence.

“I respect the decision that has been made and have paid the fine.”

But the “full” and “unreserved” apologies did not silence critics of the PM and chancellor.

Labour’s deputy leader, Angela Rayner, tweeted: “You made the rules. You broke your own law. Just go.”

The SNP’s Westminster leader, Ian Blackford, said the two leading Tories had “insulted the millions of people who faithfully followed the rules”.

Liberal Democrat leader Sir Ed Davey said: “This is a government in crisis neglecting a country in crisis.”

Reports of parties being held in Downing Street during lockdowns first emerged in December last year, with Mr Johnson initially insisting that “guidelines were followed at all times”.

Mr Sunak also told the Commons: “I did not attend any parties.”

The PM then ordered an inquiry into the allegations of rule-breaking, led by senior civil servant Sue Gray.

The Met initially said it would not retrospectively investigate the allegations unless “significant evidence” of a regulation breach came forward.

But after Ms Gray passed information to officers, they launched their own inquiry.

Her full report will not be released until the Met have concluded their investigation.

Sue Gray’s record of the gatherings

The government has faced intense pressure over gatherings held in and around Downing Street during Covid lockdowns. Senior civil servant Sue Gray has said that many of them “should not have been allowed to take place or to develop in the way that they did.” Here is what we know about them and the restrictions in place at the time:

A photo from May 2020 showed the prime minister and his staff with bottles of wine and a cheeseboard in the Downing Street garden. When asked about it, Boris Johnson said “those people were at work talking about work”.

Legal restrictions at the time said you could not leave your house without a reasonable excuse and government guidance was that you could meet one person outside of your household in an outdoor setting while exercising.

About 100 people were invited by email to “socially distanced drinks in the No 10 garden this evening”. Witnesses told the BBC the PM and his wife were among about 30 people who attended. Boris Johnson has declined to say whether he was among those there.

A gathering took place in the Cabinet Office to mark the departure of a No 10 private secretary.

On Boris Johnson’s birthday, up to 30 people gathered in the Cabinet Room at No 10 to present the prime minister with a birthday cake and sing Happy Birthday, according to a report by ITV News.

No 10 said staff had “gathered briefly” to “wish the prime minister a happy birthday”, adding that he had been there “for less than 10 minutes”.

Restrictions at the time banned most indoor gatherings involving more than two people.

Sources told the BBC that Downing Street staff members attended a gathering with Carrie Johnson in the flat where she and the prime minister live. A spokesman for Mrs Johnson denies the party took place. There was a separate gathering in No 10 Downing Street  on the same day to mark the departure of a special adviser.

Eight days earlier Boris Johnson had announced a new lockdown in England. Indoor gatherings with other households were banned, unless they were for work purposes.

These events are being investigated by the police.

A leaving event was held for No 10 aide, Cleo Watson, where people were drinking, and Mr Johnson made a speech, according to sources.

The Department for Education has confirmed it had an office gathering to thank staff for their work during the pandemic. It says drinks and snacks were brought by those who attended and no outside guests or support staff were invited.

Eight days earlier, London had been placed in restrictions which banned two or more people from different households from meeting indoors, unless “reasonably necessary” for work purposes.

The Conservative Party has admitted that an “unauthorised gathering” took place at its HQ in Westminster. It was held by the team of the party’s London-mayoral candidate, Shaun Bailey, who has since stepped down as chair of the London Assembly police and crime committee. The Metropolitan Police is to speak to two people who attended the party.