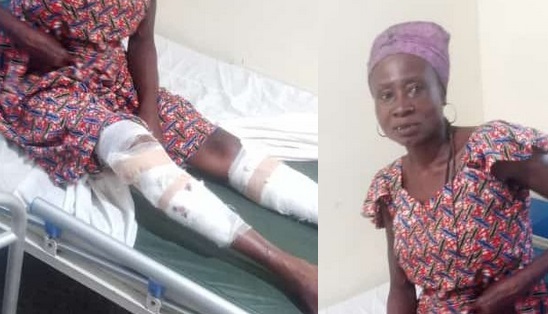 A 56-year-old woman, Akua Baduwa, has allegedly been slashed with machete multiple times by her boyfriend, Bob, aged 45, for refusing him s3x.

The woman is currently receiving treatment at the Abura Dunkwa government hospital in the Central Region after the incident which happened at Abakrampa on Sunday May 15, 2022 around 1:30 PM.

According to sources, there was a misunderstanding because the woman and her boyfriend over sex in the afternoon.

The situation reportedly got her boyfriend angry and could not control himself. He reportedly took a cutlass under his bed and slashed the victim.

She however managed to escape and cried for help drawing the attention of neighbors who rushed her to the Abura Dunkwa government hospital for treatment.

Bob, after the act, took to his heels but was arrested by the residents.

The suspect sustained cutlass wounds on her legs and waist.

Other reports say the suspect had seen the girlfriend with another man a night before the incident.

Residents disclosed that the suspect always beats his girlfriend anytime he sees her with another man.

Bob is currently with the Abura Dunkwa Police Command.