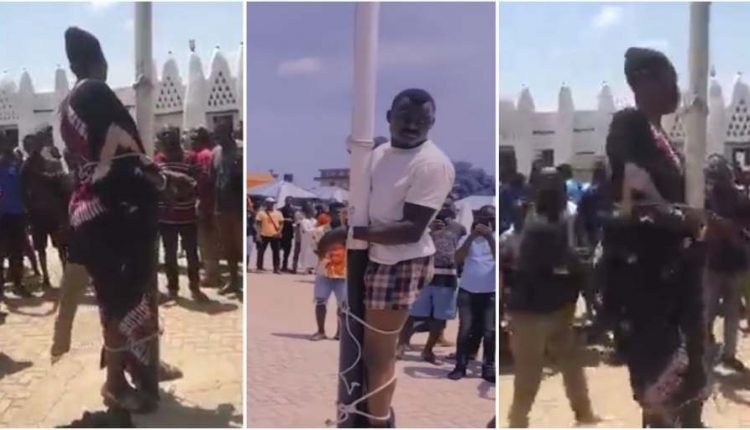 Couple whose private video found itself on social media have been given lashes in front of the Wa Naa’s Palace in the full glare of the public.
According to starfm.com.gh, the Overlord of the Waala Traditional Area, Wa-Naa Fuseini Seidu Pelpuo IV, ordered the flogging of two teenagers.

The news website reported that two teenage lovers are a tricycle driver and a ticket seller at the Wa Central Market in the Upper West Region.

They were reportedly supposed to take 100 lashes each, but Wa-Naa had mercy on them and reduced it to 20.

The lady in question allegedly uploaded the video on social media on Sunday, May 29, 2022, sparking wild reactions and condemnation.

Her action was deemed to have contravened the customs and traditions of the Waala Traditional Area, hence their punishment.

It is reported that the Waala Traditional Area made a bye-law last year prohibiting the filming and uploading of ѕɛχʋαl materials on social media.

It followed an observation that the leakage of tapes amongst the youth in the Wa municipality was becoming an order of the day.

The traditional leader has reportedly warned that anyone who falls foul of the bye-laws of the traditional area will not be spared.

Watch the video below :