Ronaldo struggled to make an impression in a 1-0 loss to Everton at Goodison Park.

Cristiano Ronaldo apologized in writing on his Instagram account on Saturday, hours after seeming to slap a phone from a fan’s hand.

Ronaldo was walking off the pitch at Everton’s Goodison Park after his Manchester United team had been defeated 1-0.

Ronaldo had to pass through some Everton supporters as he made his way back to the locker rooms.

Shortly after the incident, Sky Sports claimed that United were investigating, but Ronaldo chose to speak out publicly before his club. 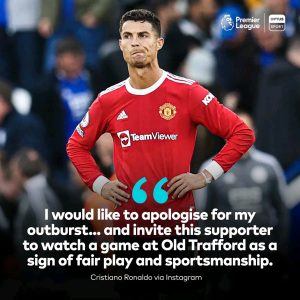 Ronaldo apologized on social media eight hours after the incident, which he called a “outburst.”

He didn’t confirm or deny that he broke or damaged the fan’s phone.

Despite the fact that they support Everton, he promised them a free ticket to Old Trafford.

“It’s never easy to deal with emotions at difficult moments like the one we’re facing,” Ronaldo said in full.

Ronaldo assaulted a kid because he lost a game. Crazy pic.twitter.com/2Cr6mYNqT4

“However, we must always be respectful, tolerant, and set an example for all the young people who enjoy this wonderful game.”

“I apologize for my reaction and, if feasible, I’d want to invite this fan to see a game at Old Trafford as a gesture of fairness and sportsmanship.”

No One Can Take My Spot – Repented Moesha Declares

Late Gospel singer, Osinachi Nwachukwu’s producer, Sunny Pee made fresh revelations about the cause of her death