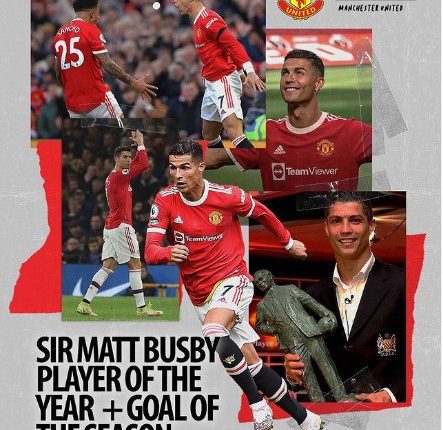 Manchester United striker, Cristiano Ronaldo has thanked fans for their support during a “very difficult season” after winning Sir Matt Busby Player of the Year and goal of the season awards.

The 37-year-old posted his gratitude to the Manchester United supporters fresh after winning the awards.

“Thanks to all the fans who voted for me.” Ronaldo wrote. “I couldn’t be more proud of winning the Sir Matt Busby Award in my comeback year to Old Trafford and to the Premier League.

“This award goes to all of the supporters who’ve never let us down during a very difficult season,
“Thank you so much for always being on our side and for helping us get Man United back on track. We know we can count on you.”

The veteran Portuguese forward scored 24 goals and provided three assists across the campaign. He had a stellar Champions League showing in the group stages, with six goals in five appearances, but was unable to help United scale through Diego Simeone’s Atletico Madrid in the round-of-16.

Kylian Mbappe named world’s most valuable player in the world as he’s now valued at £175.7million after new deal with PSG