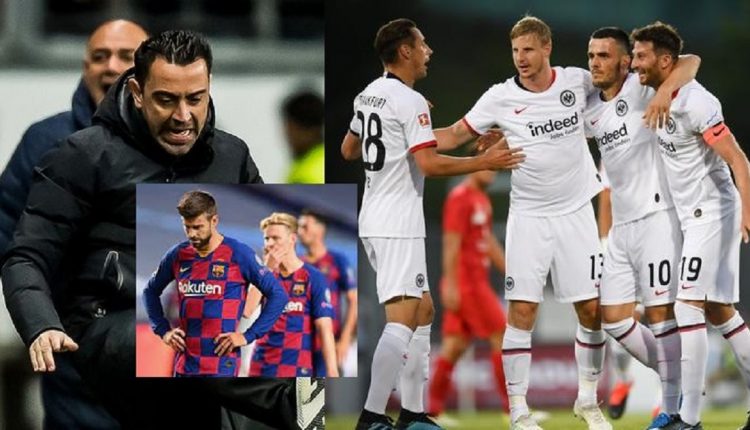 Eintracht Frankfurt produced a stunning performance as they reached the Europa League semi-finals with a remarkable 3-0 second-leg victory over Barcelona at Camp Nou on Thursday.

The two sides played out a 1-1 draw in Germany last week, and any thoughts Xavi’s men had of brushing aside their opponents on home turf were dispelled in the fourth minute when Filip Kostic scored from the penalty spot.

It got even better for the visitors before the break when Borre crashed home from outside the penalty area, before Kostic’s second in the 67th minute put the seal on one of the club’s most famous ever victories.

Oliver Glasner’s men will now face West Ham in the last four after they overcame Lyon.

Barca started dismally and fell behind in the fourth minute when Kostic slammed home from the spot after Eric Garcia had hauled down Jesper Lindstrom in the area.

Ronald Araujo forced a smart stop from Kevin Trapp with an instinctive volley shortly before the midway point of the first half as Barca belatedly woke from their slumber.

They went 2-0 down in the 36th minute, though, courtesy of a stunning 25-yard strike from Borre that flashed past Marc-Andre ter Stegen and into the roof of the net.

Ansgar Knauff fizzed a strike narrowly over Ter Stegen’s crossbar soon after as Frankfurt threatened to put the tie beyond Barca’s reach before the interval.

Frankfurt then ensured the scoreline had a scarcely believable look when Kostic drilled across Ter Stegen for his second of the game.

What does it mean? Barca’s unbeaten run comes to a crashing halt

Few expected Barca’s 15-game unbeaten streak to come to an end against a team languishing ninth in the Bundesliga, but Frankfurt were excellent value for their win.

Glasner’s side, who had xx shots to Barca’s xx, are now unbeaten in their last 10 games against Spanish sides in European competition (W6 D4), including the last five away from home (W4 D1).

America Isn’t What You Think It Is, Don’t Come – Steve Harvey To Africans