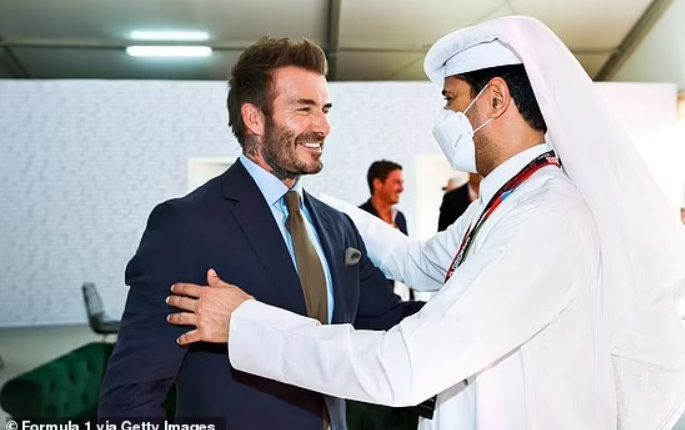 Football legend, David Beckham has been slammed for backing a footballer who came out as Gay but yet signed a multi-million-pound deal to be the face of the 2022 World Cup in Qatar, where homosexuality is illegal.

Attitude magazine’s condemnation of the former England captain, who featured on its cover with blond dyed hair in 2002, was triggered by Beckham’s support for Blackpool footballer Jake Daniels, who came out as gay earlier this month.
Beckham said: ‘It’s a shame that when someone does come out that it’s such a strange thing. I’ve always felt that way about when someone does come out, it shouldn’t be. At the end of the day there will be a huge amount of gay people in sports, and why should they be any different from anyone else.’

But Attitude said Beckham’s comments were at odds with his decision to pocket a reported £10 million to be an ‘ambassador’ for the Qatari government, which bans homosexuality and severely restricts women’s rights.

‘When we speak about performative allyship, this is what we mean,’ it wrote on Instagram. ‘David Beckham continues to keep his money just about as far as possible from where his mouth is when it comes to the LGBTQ community.’

It added that when Beckham, 47, was asked by the Evening Standard newspaper about Jake Daniels, ‘he responded with the sort of hollow response that our community has become accustomed to expect from the mega rich’.

‘Beckham asks why gay people in sport should be any different to anyone else. One reason that David might consider is that in many places around the world queer people are not only marginalised and oppressed but also persecuted. One such place is Qatar, a country that he is about to become the face of.’

It added: ‘It’s time to demand more from our so-called allies.’
Beckham’s associates claim the former Manchester United star is satisfied that changes have been made in the Gulf state.

But Attitude said: ‘Qatar is an extremely homophobic country where, under sharia law, men who have sexual relations with other men can be put to death. Other punishments include lifelong imprisonment and floggings.

In April, a Qatari security official warned fans planning to travel out for the World Cup that rainbow flags [supporting the LGBTQ community] could be confiscated. Fans had previously been told this wouldn’t be the case.

The Mail on Sunday revealed Beckham’s deal with Qatar last February, which sparked fury from critics, including the human rights pressure group Amnesty. It said at the time: ‘We would urge him to learn about the deeply concerning human rights situation in Qatar and be prepared to speak out about it.’