Ghana Football Association says the 2022 world cup in Qatar is a revenge time against their 'unforgiveable' rivalry team Uruguay. 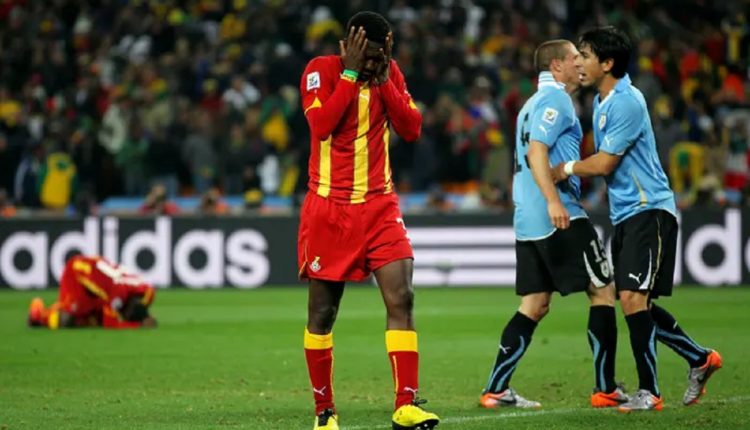 Ghana Football Association president Kurt Okraku believes it is time for the Black Stars to repay Uruguay for the misery they caused during the 2010 World Cup. This comes after the two sides were drawn together for the forthcoming 2022 World Cup in Qatar,

After being drawn in Group H, which also includes Cristiano Ronaldo’s Portugal and Son Heung-South Min’s Korea, the Black Stars have been given a chance for vengeance 12 years after one of the most famous games in World Cup history.

After a 1-1 draw when extra time, Ghana lost 4-2 in a penalty shoot-out in South Africa 2010, after Luis Suarez’s handball denied the Black Stars a probable match-winner and Asamoah Gyan blasted the subsequent spot-kick against the crossbar.

On Friday’s draw, Ghana FA president Kurt Okraku told BBC Sport Africa, “We believe that it will be revenge time.”

“We thought we had clearly won that particular game but for that save from Suarez. It is very interesting for us to pitch against them again, obviously with fond memories [this time].

“It is important that we all set the record straight.”

Ghana is ready to return to the World Cup after missing out on the 2018 edition in Russia.

On November 24, the Black Stars will face Portugal at Stadium 974 in Doha in the Qatar Cup, which runs from November 21 to December 18.

The Black Stars return to action four days later when they face South Korea at the Education City Stadium in Al Rayyan.

The important match against Uruguay will take place on December 2, and the Al Janoub Stadium in Al Wakrah has been announced as the venue.

While aiming for a win over La Celeste, Ghana will also be hoping to go to the knockout stage to make up for their dismal performance at the 2014 World Cup, where they were eliminated in the first round.

It was their first time failing to go past the group stage, after reaching the Round of 16 in Germany in 2006 and the quarter-finals in 2010.