Groom stops dancing, storms out in anger because wedding guests were spraying him 50 Naira (Watch video) 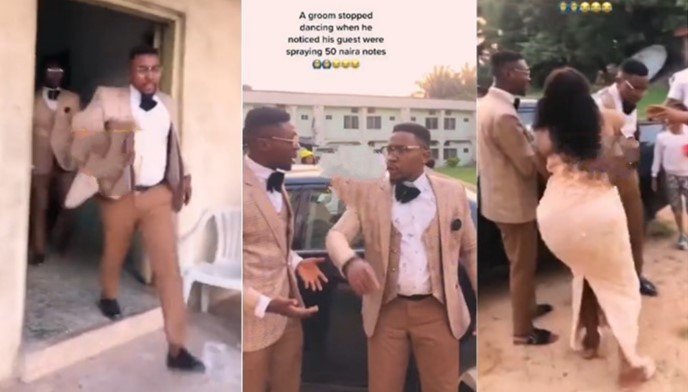 Guests at a Nigerian groom’s wedding expressed their displeasure with him after he was drenched with 50 naira notes.

In a viral video, he can be seen storming out of the wedding location, expressing his displeasure and stating that he will no longer dance.

His best man and a few other ladies were seen attempting to get him to return inside and keep dancing.

When asked why he refused to dance, he complained about how much he had spent on the wedding only to have guests sprinkle him with N50.

He then proceeded to remove his wedding suit, which increased the pressure on him as his friends and family continued to pleading with him.

Check out the video below:

Groom storms out of his wedding, refuses to dance after guests sprayed him N50 notes pic.twitter.com/1cDYOooCgB