Hearts of Oak were defeated 1-0 by Kotoko thanks to Etouga’s penalty.

Mbella Etouga’s penalty was enough for Asante Kotoko to upset sworn rivals Hearts of Oak at the Baba Yara Stadium on Sunday, putting them one step closer to the Ghana Premier League title.

The win extended Kotoko’s lead over Hearts of Oak to 16 points, while maintaining them eight points ahead of Bechem United in second place.

Kotoko came into the game ready to win for the first time after failing to beat Hearts in their previous two meetings this season, and they got off to a great start.

From the start, they pressed Hearts, forcing blunders in the opening few minutes. Ibrahim Imoro, Kotoko’s stand-in captain, wriggled his way into the area and hit the post frame in the third minute. 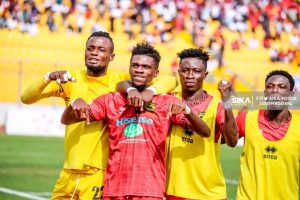 Hearts were unable to cope with Kotoko’s ferocity and were eventually penalized. Nurudeen was called for obstructing Gama in the box with his outstretched hand.

Etouga, who had been criticised for bad league and President’s Cup performances against Hearts, stepped up and comfortably scored to put Kotoko ahead.

After conceding, Hearts rallied and attempted to equalize, but Kotoko’s defense stood firm, limiting the Phobians to long-range attempts.

Fatawu Mohammed, the captain of Hearts, had a fantastic chance before halftime but blasted over under no pressure.