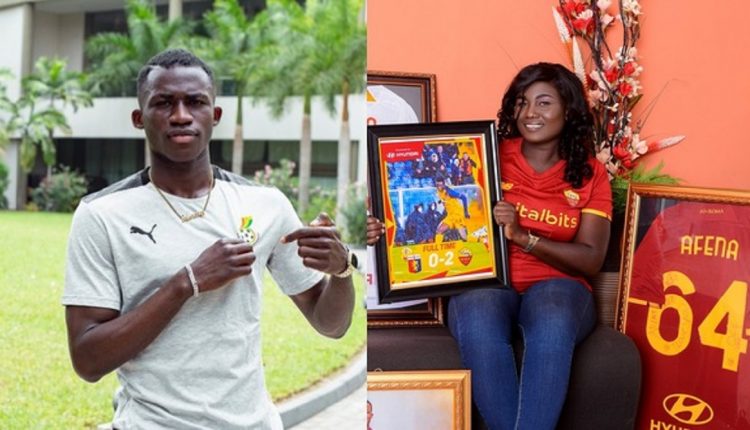 They believe that a mother is someone who can take the place of everyone else but herself. This comment perfectly expresses the impact Juliet Adubea has had on his son, Felix Afena-Gyan

The striker for the Black Stars never misses an occasion to tell the world how much she adores her mother. Afena-Gyan has praised his mother for the role she played in his life in both local and Italian media.

After making his Serie A debut in AS Roma’s 2-1 win over Cagliari, Felix Afena-Gyan dedicated his first AS Roma appearance to his mother, saying “I love you mum.”

Felix Afena-Gyan could not disguise his delight after making his debut, dedicating his first appearance to his fans and teammates and declaring love to his Ghanaian mother in an emotional interview.

Felix Afena-mother, Gyan’s however, is unknown.

Despite the fact that we don’t know much about the woman, we do know her name: Madam Juliet Adubea.

Juliet Adubea, who is quite active on social media, has been posting some emotional moments involving his son on social media, especially on Twitter, whenever Felix Afena-Gyan hits great heights in his short career.

Juliet’s age, employment, birthplace, and other personal information are unknown, but netizens have praised her and her son’s relationship.

On January 19, 2022, while celebrating his birthday, Madam Juliet Adubea got netizens back on their feet by writing an emotional letter to her son about how happy she is as a mother.

“God is to be praised for bringing you thus far in life. I feel so warm every time I look at you, my son???? In fact, it’s been a tremendous pleasure to watch you develop your abilities. “You turned me become a mother”???? I wish you all of the most wonderful things your heart desires. FELIX OHENE AFENA -GYAN, HAPPY BIRTHDAY! “she stated on her Twitter account.

Over 5 tonnes of cocaine seized by Cape Verdean Police