Samuel Inkoom is a signer for Accra Hearts of Oak.

Samuel Inkoom, a former member of the Ghanaian national team, has signed with Accra Hearts of Oak, a team in the Ghanaian Premier League.

The former Basel defender has agreed to terms with the current Premier League winners on a one-year contract.

The player completed the transfer process today and is currently awaiting the issuance of his International Transfer Certificate (ITC), which would allow him to make his debut for the Phobians. 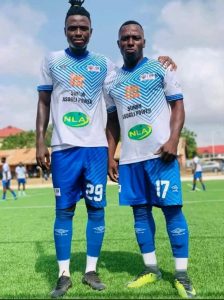 As of the beginning of March, he has been practicing with the Accra-based club in order to allow the technical team to analyze his match fitness and ability.

Inkoom had hoped to play for his former club Kumasi Asante Kotoko, but he was unable to come to terms with the Porcupine Warriors due to a lack of communication.

In 2008, he was a member of the Kotoko team that won the Ghana Premier League, before moving on to play for Swiss giants Basel.

His time with the Black Stars stretched from 2008 to 2016, with appearances at several Africa Cup of Nations (AFCON) tournaments and the 2010 FIFA World Cup, in which Ghana reached the quarter-finals, among others.

The right-most back’s recent professional club was Torpedo Kutaisi in Georgia’s top division, where he played for less than a year before moving on.

The 32-year-old was also a member of Ghana’s 2015 Africa Cup of Nations campaign, during which the Black Stars were defeated by Ivory Coast in the final.

Non-Communicable Diseases On Rise In Africa – WHO Warns

Sister Osinachi Nwachukwu, a gospel singer, died at the age of 42.