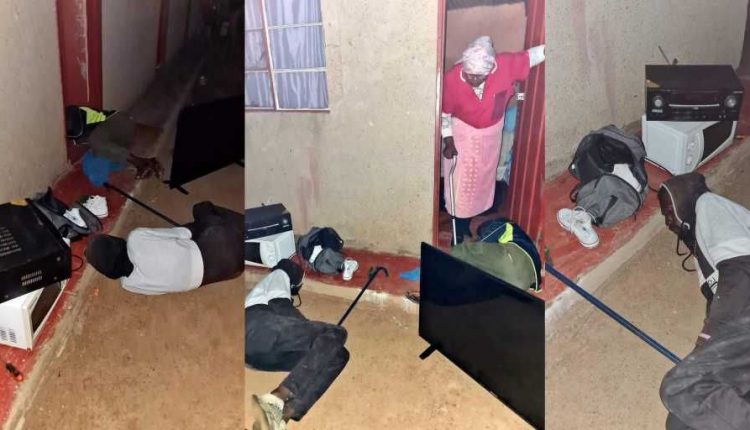 After breaking into an elderly woman’s home in the middle of the night, the robbers fell asleep, causing a commotion.

Just when you think you’ve seen it all, images of two robbers who supposedly fell asleep shortly after robbing a house have gone popular on social media, with many speculating about the house’s owner’s state-of-the-art witchcraft.

Last Thursday, the incident occurred at a home in Hammanskraal, Pretoria, South Africa.

Two burglars are seen laying next to household assets that they allegedly stole from the house, including a giant TV set, a microwave oven, and other objects, in the photographs (seen below).

In one of the photos, an elderly lady is seen peering at the goons, and several curious Mzansi citizens have questions for her.

A claw bar and a set of pliers can also be seen in the photos, which are thought to have been used to gain access to the residence.

Nothing, however, causes more laughter than the old lady of the home emerging from the house with her height-adjustable metallic walking stick in hand, proudly witnessing what her black magic had saved her from.

The incident was captured on video and uploaded on social media, and it appears that the elderly lady was prepared for intruders: