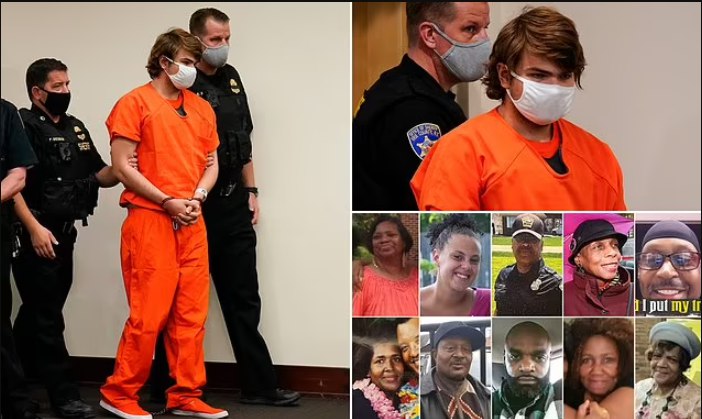 The 18-year-old accused of fatally shooting 10 Black shoppers at a Buffalo, New York, supermarket this month has been charged with domestic terrorism motivated by hate, and 10 counts of first-degree murder.

A grand jury on Wednesday, June 1, decided on the charges against Payton Gendron who describes himself as a white supremacist.

Prosecutors allege that the 18-year-old who earlier pleaded not guilty, was motivated by racial hatred.

The suspect is accused of shooting 13 people in total during the massacre. He will also face 10 separate first-degree murder charges.

The domestic terrorism charge filed on Wednesday accuses the suspect of killing “because of the perceived race and/or colour” of his victims.

Ten people were killed and three injured in the May 14 shooting, when the suspect drove more than 320km (200 miles) to a predominantly black neighborhood in Buffalo, New York’s second-largest city.

After the attack, Mayor Byron Brown said the suspect had travelled there with the specific intention of ending “as many black lives as possible”.

An 180-page document by the alleged attacker has since emerged, in which he describes himself as a fascist and a white supremacist.

The gunman, dressed in military gear, drove into the car park at the city’s Tops Friendly Market and began livestreaming the shooting spree.

A security guard fired several shots at the attacker, but police said he was protected by a bulletproof vest. The gunman is accused of killing the guard before continuing his attack.

All of the 10 people who were killed were black.
New York state’s top prosecutor is also investigating whether social media companies enabled the attack by allowing it to be streamed, promoted, or planned over their platforms.

“The fact that an individual can post detailed plans to commit such an act of hate without consequence, and then stream it for the world to see is bone-chilling and unfathomable,” Attorney General Letitia James said.

Twitch, the website where the attack was streamed, said the video was taken down less than two minutes after the violence began but not before it was duplicated and shared on other streaming sites.