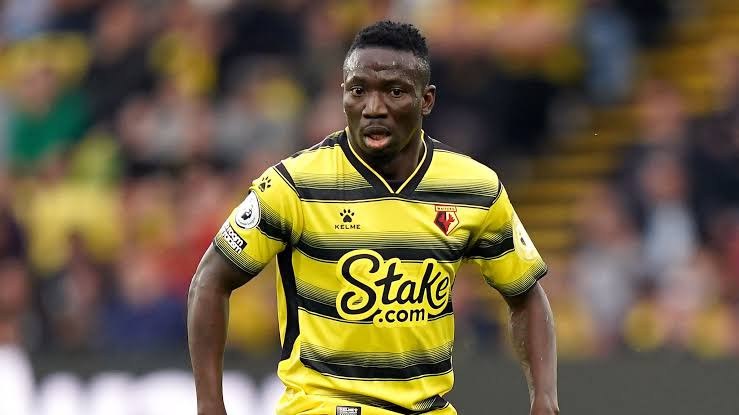 Watford have confirmed Nigerian midfielder Oghenekaro Etebo has been released following the completion of his loan stint from parent club Stoke City.

Etebo moved to the Vicarage Road on a season-long loan deal last summer, with the option to join the Hornets on a permanent deal.

But the 26-year-old has been hampered by a long-term injury which limited his appearance for the club to just 10 league appearances in the 2021/22 season.
Watford announced on their website that the Nigeria is among the five players released as the club prepares to play in the Sky Bet Championship next season following their relegation from the Premier League.

“Following the conclusion of the 2021/22 Premier League season, Watford FC can confirm that five first-team players have left the club,”reads a statement on the club’s official website.

“Goalkeeper Ben Foster has been released at the end of his contract, bringing the curtain down on a storied Hornets career which saw the 39-year-old feature for the club over 200 times during two seasons on loan between 2005 and 2007 and after re-signing permanently from West Bromwich Albion in 2018.

“Defender Nicolas Nkoulou – who made three league appearances after signing in October 2021 – and forward Andre Gray – who spent the last campaign on loan at Queens Park Rangers – have also departed upon the expiration of their deals.
“Juraj Kucka has chosen to activate a release clause in his contract, bringing an end to his one-season stay in Hertfordshire, while fellow midfielder Peter Etebo has returned to parent club Stoke City following his loan spell at Vicarage Road.

With Etebo’s exit there are now five Nigerians in the club -William Troost-Ekong, Emmanuel Dennis, Samuel Kalu and Maduka Okoye at the club.